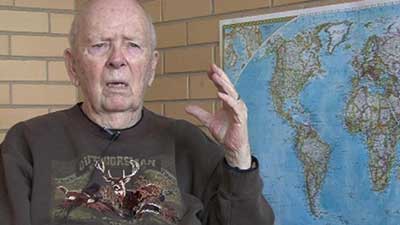 Retired SVD missionary, Father Bill Halvey, arrived in Papua New Guinea in 1961 and served there for 26 years. The country is located in the South Pacific, less than 100 miles off the northern coast of Australia, and only a few degrees south of the equator. The first humans arrived there almost 45,000 years ago, but it remained relatively isolated until the mid-1800’s. Fr. Halvey explained why. “New Guinea had been avoided because there were all kinds of rumors about cannibals.”

He explained the relationship between their many languages and the geography. “There were more than 700 languages, not dialects, on the main island and the surrounding smaller islands. The great diversity was a result of the geography. Most of the island is mountainous and, in addition, there are rain forests and swampy rivers. These natural barriers served to divide and isolate the people in small groups. A group of people on one side of a river could have one language, while just across the river, another group could have an entirely different one.” 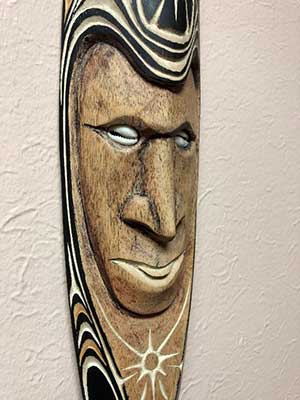 He learned about their beliefs during his time with them. “They had a spirit world. I would not call it a spirituality, or even a religion. Like many people in the past, they believed in their ancestors. Their ancestors made up their spirit world.”

“They honored their ancestors by building what we would call ‘house tomerons’, or house of their ancestors. It was only for men. Women were absolutely forbidden. They made beautiful masks to keep the memory of their ancestors alive. Inside the house tomerons, on the grass walls, they hung their masks (see photo of mask on display at the Retirement Residence in Techny, Illinois where Fr. Halvey lives).”

A person’s name was believed to exercise power over the person. “I will give you an example of how the spirit world figured in their lives. I was out in the bush, teaching in the school. Until the kids got to know me, they would be afraid, especially the girls, to give me their name. The idea was that if they give me their name, I would somehow have a kind of power over them. That was a holdover from earlier days.” 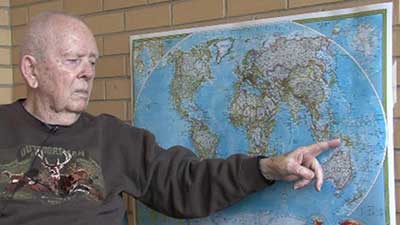 Pointing to PNG on the world map on the wall next to him, Fr. Halvey said, “They started trading back in the 1800’s. Little by little, over time, mostly on just a small part of the coast, a trade language grew up that today is called pidgin English. It is now a language in itself with its own dictionary.”

“Today they have pidgin English newspapers. Books are written in pidgin English. A missionary arriving on the coast might encounter four or five different languages. If he did not speak any of these, but knew pidgin English, he could get by. Up in the mountains, pidgin English came much, much later. A missionary had to learn that language up there and that was hard going. There were no written books, no written history, only an oral tradition in which stories were handed down orally.”

SVD missionaries have been there for more than 100 years. “Our first Divine Word missionaries went there in the late 1800’s. The first missionaries went for life. They were not given a leave to return home to visit their families. This was due to the fact that, at that time, the only form of transportation for international travel was by boat. There were no airplanes. That meant that once you got there, you stayed there. Sadly, a great many of the early missionaries died at a young age from what is called, ‘blackwater fever.’ It is a severe complication of malaria.” 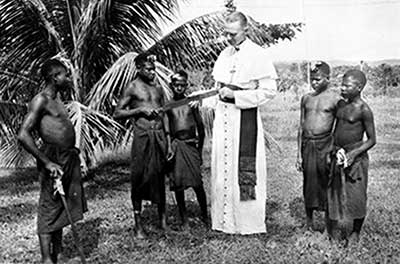 The local culture was not like any other they had ever encountered. “Missionaries who went there in the late 1930’s said the people had never seen a radio, or a mirror. They wore bush clothing. The culture was completely foreign to European and American missionaries. For example, we are a very independent group of people. We often express it in terms of everyone being for himself or herself. The French philosopher taught us, ‘I think, therefore, I am.’ The New Guinea people say, ‘I am because we are.’ That is a different outlook all together. Think about that: ‘I am because we are.’ You have a village life where little boys and girls could run around and go into any house they wanted.”

World War II had a devastating impact. “During World War II, the Japanese came into the islands and inflicted considerable damage. Many of the natives fled into the mountains. The Americans and the Australians bombed the island. After World War II, and through the nineteen forties and fifties, the missionaries spent their time rebuilding after the damage that was done by the War.”

“The houses, chapels, and clinics were all destroyed. The missionaries had to start over. To make things worse, much of the military ordnance in the form of unexploded grenades, rockets, and bombs were left behind. They had to deal with a people who had been traumatized by what had been inflicted upon them.”

“In order to rebuild, the missionaries had to raise funds. They often did it by forming Mission Clubs and writing home for support. We could not talk about converting the natives to Christianity. What we had to do was start with a kind of evangelizing that consisted mainly of building bush schools. Most of the local buildings were constructed of bush material. Nevertheless, little by little, they built schools that were permanent. This took a lot of hard work. Years of it.”

Seeds were planted that yielded a rich harvest. “Today we have a good number of native New Guinea priests and brothers, and certainly a good number of native New Guinea sisters. They have their own superiors now. It has been an amazing transformation. When I left there, I was a chaplain in a teacher training college. That is how far we have come. We have a university in the capital, Port Morseby.”

“I ran a clinic and a school and was glad for what I could do for the kids. I was glad I could help people with malaria, and the other kinds of infections that needed penicillin. It was a daily thing.”

The mission experience had a deep personal impact on Fr. Halvey. “After having lived in the bush for 26 years, their culture had a deep impact on me because I came from the big city of Chicago. I lived in a small village, green all around, with bush houses, and simple people. Their lifestyle trickled down somehow and it affected me. I didn’t know it was happening. It was another way of life that was closer to the earth. The way they looked at the earth, and the way they looked at creatures was very different. For me, it was another kind of knowing I could not put into words, another kind of seeing that I cannot describe.”

“I am deeply grateful to those people for what they gave me. It was much more than I ever gave them.”