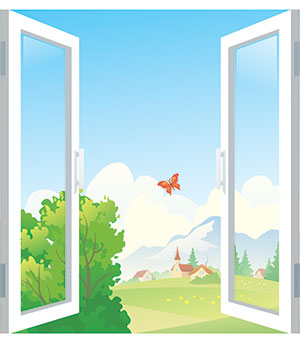 Two men, seriously ill, were in the same hospital room. One of them on a bed, which was near the only window in the room, and the other had to lie on his stomach with his face down all the time. The man whose bed was near the window would sit and describe to his roommate everything he saw through that window. A beautiful park bathed in the autumn sun, a lake with swans swimming in it, small children running around the alleys. His language was so colorful that you could even sense the smell of that park. The man, who was confined to the bed, was waiting for this moment enthusiastically every day.

Those stories continued for days and weeks, but one day, the patient from the bed by the window died. His companion asked the nurse to move his bed closer to the window and then he was surprised to notice that only a large, white wall, could be seen through that window. “How is it possible?” he asked, “He saw a beautiful park through this window.”

“He couldn't see anything” answered the nurse.

“He was blind. He probably invented those stories to relieve your suffering.”

There is a great joy in making others happy, regardless of the situation in which we find ourselves. Sharing problems and worries is to burden others. Sharing joys is to multiply happiness that can never decrease by sharing. The point is this: whoever sows sparingly will also reap sparingly, and whoever sows bountifully will also reap bountifully.

“Each one must give as he has decided in his heart, not reluctantly or under compulsion, for God loves a cheerful giver.”
2 Corinthians 9:6-7